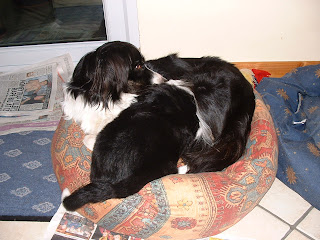 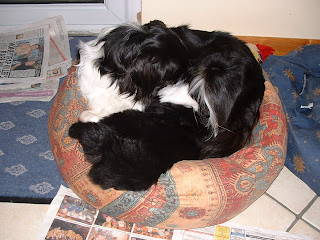 I'm not sure where this last week has gone. Time is passing far to fast! Spinney has had lots of visitors this week and is loving all the attention. 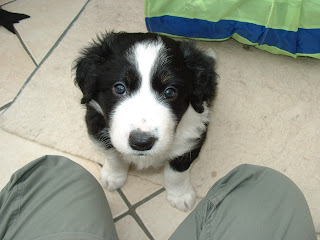 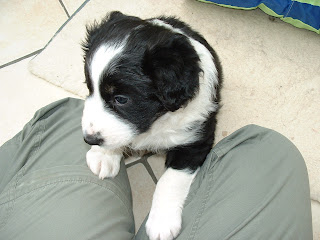 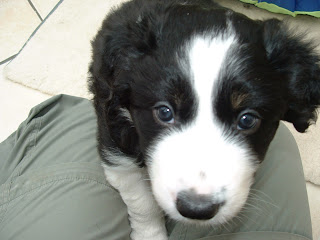 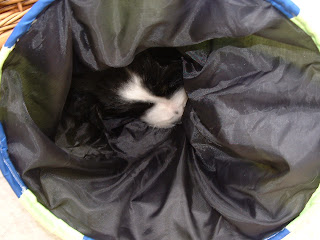 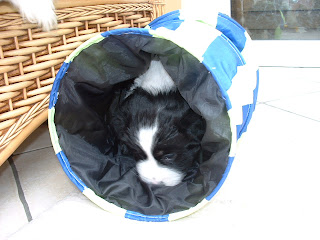 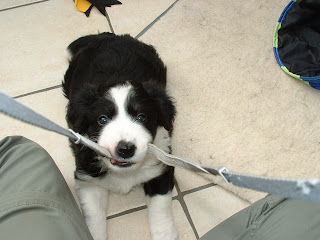 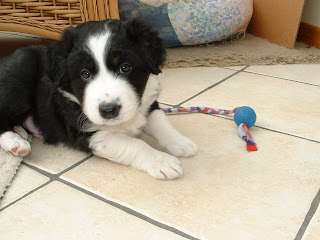 I can't believe he leaves home in a week, we will miss him so much :O(

Playing with his activity centre

In the garden with Elwyn

Naughty puppy escaping from his pen!

Playing rough with his mum, she is so soft on him, even when he bites her ears!!

I think Miya will also miss this little chap when he leaves home :O(

Wondering around the garden with Kes

Look at that fluffy little bear! 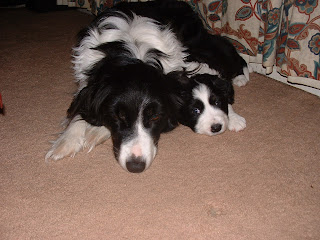 He spends his evenings curled up with his mum :O) 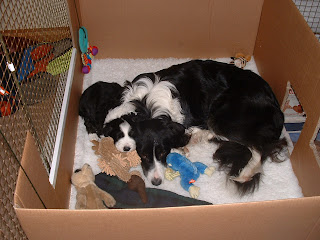 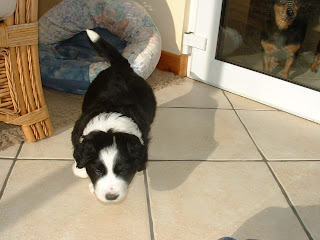 Wondering around the conservatory 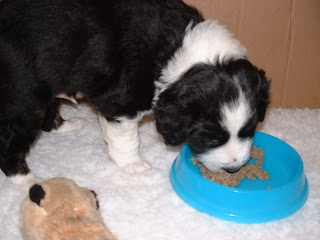 
Today I bought the PUPPY a cat tunnel, I think I have a NEW puppy!! Elwyn is so naughty :O)

Spinney had his first walk outside today

He soon took off across the grass :O)

Spinney is playing with his new cat balls but is distracted by Zip and Elwyn who are falling out about who can stand on the pile of newspapers outside of the pen! He goes to see whats going on but finds a piece of paper on route and decides to kill that instead :O)

Spinney finally gets to play with his new tunnel, he has been through it a few times but seems to prefer to kill it. Poor Zip is STILL afraid of him although he clearly can't get enough of being near him, so cute!!

I just love this clip, he is watching El watching him, I love the way he crosses his little paws :O)

Humm, yum yum minced beef, Spinney gets his first taste of real meat and seems to enjoy it!!

It seems to be a tradition in this house that all the dogs LOVE cardboard, they all spend hours chewing on it and Spinney seems to be carrying it on!

Playing with Elwyn with dad watching on :O)

Taking over the house!! 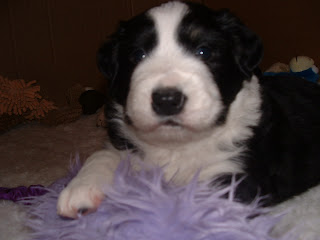 Who'd have thought it, a tiny little thing that looks so sweet could be so scary! 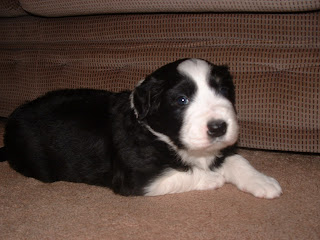 Our 3 collies seems to be terrified of him :O( 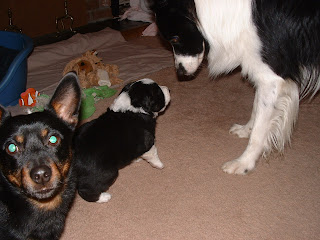 Poor Zip ended up backed into a corner under the TV stood in the toy box, it was very funny, I don't think he appreciated our laughter, poor spinney couldn't understand why this giant kept backing off from him! 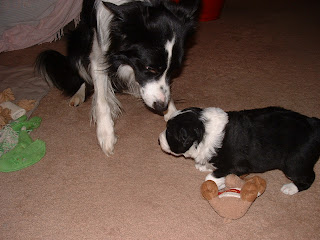 Here is Zip looking very worried, he is fine nose to nose but as soon as Spinney play bows he is off :O) 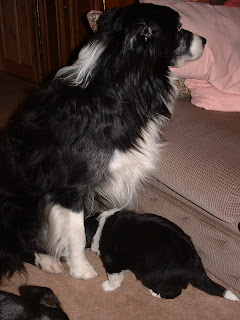 His Dad, Fennec, has always been terrified of puppies. So there is nothing new there, he daren't even look at him! 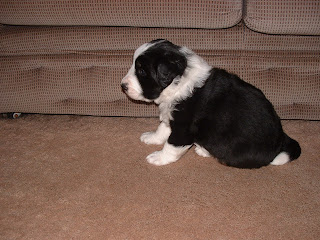 Such a scary little thing!! Ha-ha 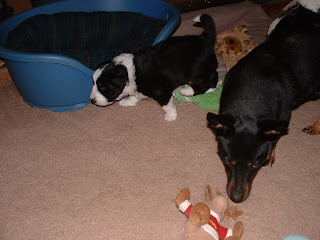 Luckily Elwyn isn't scared. They are starting to play together more and more, El is starting to realise that Spinney is play bowing at him and not doing some strange war dance!! 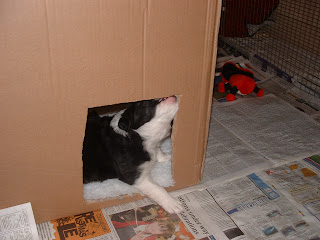 Is it a bulldog!! 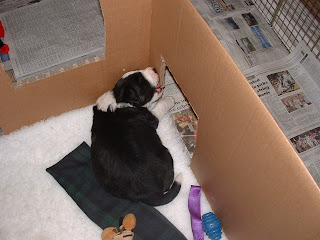 No, its a naughty puppy eating us out of house AND his home :O) 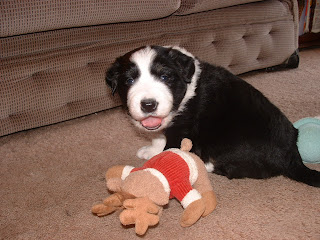 Can you see the naughtiness!! Tonight I've caught him chewing the magazine rack and swinging on the curtains - OMG whats he going to be up to when he is 4 weeks old!! 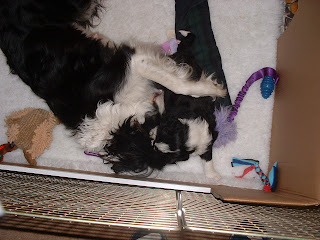 Playing with his Mum :O) 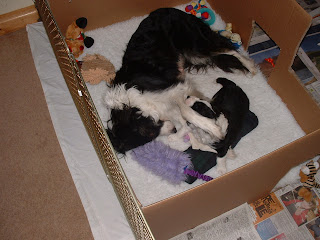 He goes for her neck but she side swipes him :O) 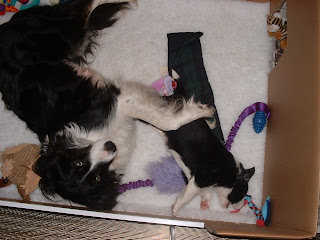 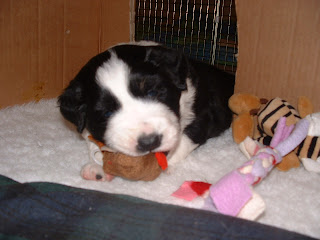 He has a little clockwork chicken that vibrates, I thought this might faze him, not on your nellie!! 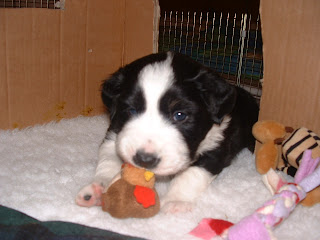 He seems to enjoy the vibrations on his gums 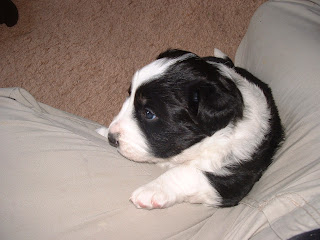 Strangely he's been watching "Cops with cameras"!! He stopped what he was doing a few times to sit and watch the telly 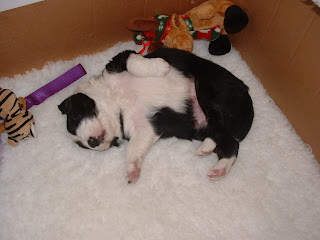 Looking out of the window